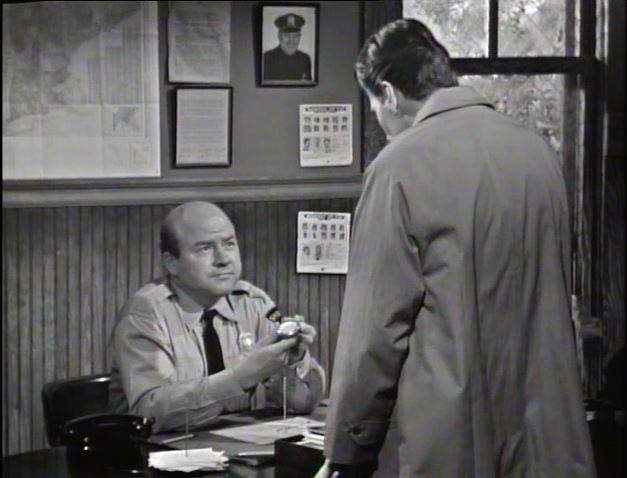 As the news of Bill Malloy’s death ripples across Collinsport, it seems a cruel hand of fate that Burke Devlin is the last to find out, the one who had been counting on him the most and therefore whose lingering hope had held out the longest.

Different people have been affected by Malloy’s death in different ways, and this week of episodes presents a series of character defining moments for those most centrally involved. For Elizabeth Stoddard, after the initial shock of caretaker Matthew Morgan’s questionable deed in trying to cover up that Malloy’s body had washed ashore near Collinwood by pushing the body back out to sea, there is in keeping with a matriarch of her stature the necessity of maintaining the dignity of not only herself, but also of Collinwood by seeing to it that all members of the household are allowed to function normally while still maintaining a certain tone of mourning, especially with Carolyn having felt the loss more profoundly than most in having lost a key paternal figure which she has previously cited as the closest thing she has ever known to a real father.

Burke Devlin’s reaction is the most curious, in the way that he seems to view Malloy’s death as a fundamental flaw in human nature, as if fate had intervened specifically to prevent him from clearing his name. Unlike those who mourn the passing of Bill Malloy for the life he lived, Burke takes this grim occasion to eulogize on the death of honesty, in mourning for himself.

It’s a soap opera after all, a show about people and the troubled unsatisfied lives they lead, and no one is perfect, not even the man who seemingly has everything in the palm of his hand.

END_OF_DOCUMENT_TOKEN_TO_BE_REPLACED

Today Dark Shadows crosses over to the supernatural. In so doing, a new chapter in the story of Victoria Winters is presented; more about this below, in the main body of the post.

Dark Shadows fans have wondered why the original story of Victoria Winters, as outlined in the series bible Shadows on the Wall by story creator and developer Art Wallace, was dropped. It wasn’t; rather, it was revised.

Episode 60, also written by Wallace, strongly hints for the family background of Victoria Winters a maternal rather than paternal link to Collinwood, which is implied further in episode 127.

END_OF_DOCUMENT_TOKEN_TO_BE_REPLACED

It almost feels like the supernatural era of Dark Shadows starts right here in episode 50.

Aside from the fact that a man Elizabeth Stoddard has known for twenty-five years is still missing, these late evening scenes in and around the Collinwood estate carry a decidedly ominous tone throughout.

There’s talk of ghosts and tragic family legends, the Wailing Widows, and premonitions of death courtesy of a nine-year-old boy with a crystal ball who seems to know for certain what grim and deathly portents this night will bring forth and for whom.

Lately daytime television’s first gothic serial drama has been branching into mystery and suspense, and here in this episode story creator and developer Art Wallace is reaching back for the supernatural and noirish mid-1940s inspirations of Dark Shadows to bring a kind of otherworldly atmosphere to the current story, enough so that the viewer would possibly be wondering whether Bill Malloy’s disappearance may be the result of darker, more paranormal forces at work.

Episode 50 is about as close to the supernatural as Dark Shadows has gotten thus far without actually crossing over; it will be in one of next week’s episodes when the lines between the physical and spirit worlds really begin to blur.

END_OF_DOCUMENT_TOKEN_TO_BE_REPLACED

Today the talk of Collinsport is Bill Malloy.

Not that he was particularly popular; matter of fact, most folks just seemed to take him for granted, that is, when he was around.

It’s a seeming disappearance that has everyone talking about a man many around town wouldn’t have otherwise given a second thought to.

Even more than this, there exists in the minds of some the possibility of foul play, causing even friends of long-standing to begin turning against one another.

That’s what happens when you bring Alfred Hitchcock to a town like Collinsport; the smaller the populace, the larger the mystery, the more persistent the questions, the greater the concerns.

END_OF_DOCUMENT_TOKEN_TO_BE_REPLACED

The early days of Dark Shadows are becoming especially interesting; as of this episode, the influence of Alfred Hitchcock becomes apparent.

I’ve managed to pinpoint the exact source Dan Curtis drew upon for the Bill Malloy story, an episode from the anthology series The Alfred Hitchcock Hour, which will also reveal from where the idea was derived for the curious and sinister approach to Thayer David’s makeup job in his portrayal of Matthew Morgan.

In the post for episode 64, we’ll examine these points in depth, as well as how Hitchcock would later inspire Dan Curtis as a director.

“My name is Victoria Winters…”

“Good evening… or, rather, good afternoon…” 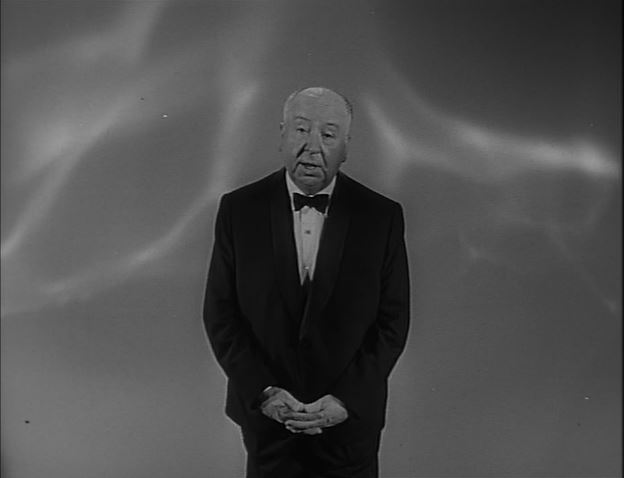 “I thought Monday would never come…” 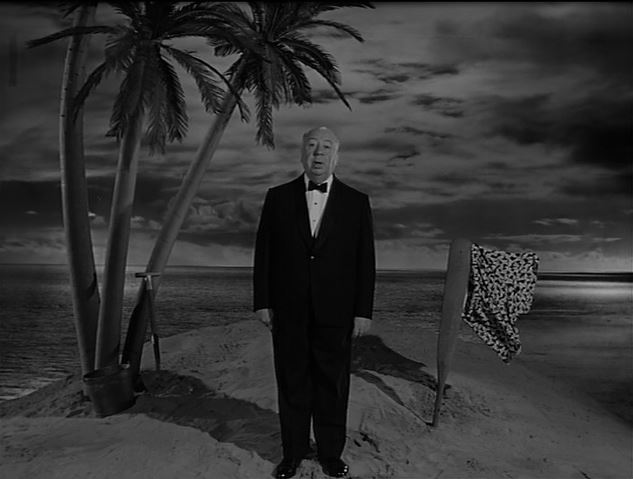 “Today’s story concerns that of a man with an agenda to be fulfilled; that is, one who likes to make appointments for others, so that he can meet with them after hours. The question is, for today, whether this man can indeed make it to the meeting he has arranged, even if the other principals involved, despite their not wanting to attend, nonetheless manage to arrive on time… ” 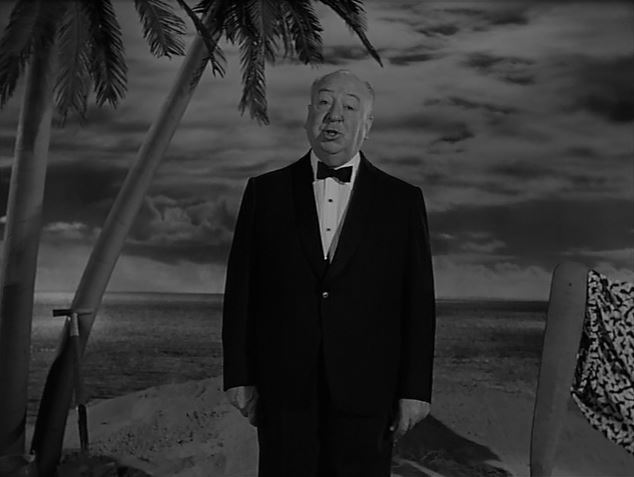 “…Oh, dear. I fear that my time on this program may be cut short. I’ve just now, through the control room microphone, heard the lady director tell the executive producer that she doesn’t like me, because my trousers ride up and I look like Mr. Potato Head. Therefore, I shall endeavor to provide myself with a complete makeover before we arrive at the final scene. In the meantime, here is a word from our sponsor…” 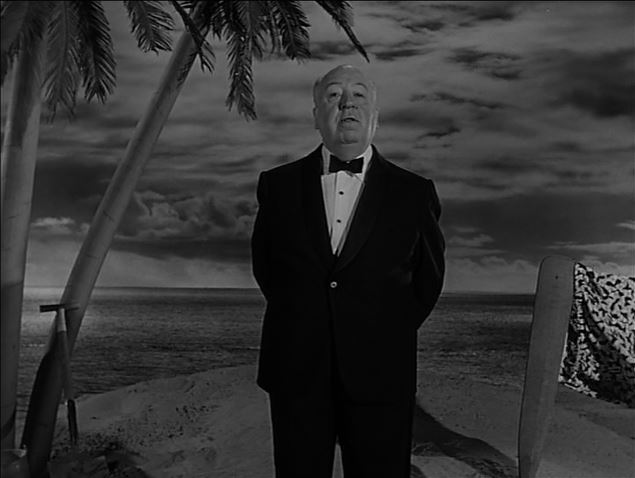 END_OF_DOCUMENT_TOKEN_TO_BE_REPLACED

Over this past week of episodes, ever since Bill Malloy became the de facto star of Dark Shadows, there’s something you notice: He doesn’t have a set of his own.

Every main regular player has their own set created to define their base of operations, a place where they seem at home and appear to have the advantage when playing host to visitors: Burke Devlin has his grand three-room suite on the top floor of Collinsport Inn; Roger has his place beside the Collinwood drawing room liquor cabinet – matter of fact, in today’s episode a new set has been created for him, a luxurious office space at the cannery; even Joe Haskell had an office set created for him, which was shown in episode 41 during his phone call with Mrs. Stoddard.

Bill Malloy on the other hand makes most of his phone calls relating to the present storyline from the pay phone at the back wall of the Blue Whale; to meet with the principals involved in his plans, he uses a table right smack in the center of the room. In today’s episode he’s even calling Roger at Collinwood using the phone in Roger’s office, and arranges a meeting with Burke at the Blue Whale from the same location. He never has a phone or room to call his own; as a sudden main player, his character is really little more than a “floater.” The writing staff even addresses this point in today’s episode, just in case the viewer has been wondering about the same thing:

Burke: Are you making the Blue Whale your office now?

Bill: Sometimes you get the most privacy in the most public place.

Oh, alright; so long as you don’t mind the details of your private plans being randomly picked up by other Blue Whale customers and possibly the bartender as well.

Today Bill Malloy is talking card games. He tells Burke that he’s put most of his cards down, and now he’s ready to play his hole card. The term “ace in the hole” has the following definition: “A hidden advantage or resource kept in reserve until needed.” It’s derived from stud poker; while you place your bets, you hold a key potentially winning card face down, or “in the hole,” until you’re ready to play it.

Bill indicates to Burke that the hole card he’s ready to play could possibly be walking right into the Blue Whale at any moment, adding that he’ll know him when he sees him; that means the viewer will as well.

END_OF_DOCUMENT_TOKEN_TO_BE_REPLACED

Bill Malloy these days comes across as the man with all the answers; or at the very least appears to know the proper solutions, and the means of applying them, to save the Collins family from ruin in the face of Burke Devlin’s determined vendetta.

Knowledge can be a blessing; freeing you from short-sighted doubt as well as fear of the unknown. Knowledge can also be a curse; setting you apart from others while leaving you torn over sudden and unforeseen divided loyalties.

So what do you do when you’ve learned too much about the very people you rely on the most? If you’re Bill Malloy, you skip out on work for an afternoon and go to the Blue Whale where you can find a nice quiet table to drink things over for a while.

END_OF_DOCUMENT_TOKEN_TO_BE_REPLACED

Dark Shadows from the Beginning
Blog at WordPress.com.