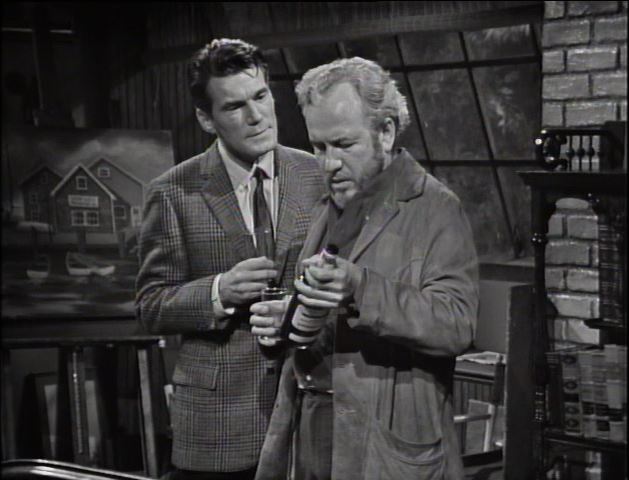 One of the really fun things about Burke Devlin is the way he just goes wherever he pleases, which is to say where he’s not wanted. What a change from how the character was first introduced, a dark but affable Trojan Horse working his hidden agenda by schmoozing his way from person to person aided by a smug, deceptive charm that just below the surface is as patronizing as it is ingratiating. Yet it’s true that a lot has changed in just these few days since his return to Collinsport.

A missing brake valve from a car brought Roger Collins unannounced to his hotel room for a midnight tirade. The following morning, his breakfast was interrupted by another unannounced visitor, this time Bill Malloy, who as Burke finished eating just hovered nearby with the determined gruffness of a drill sergeant pulling a surprise inspection on the barracks. Speaking of surprise inspections, while Burke was away in Bangor meeting with a business associate, the sheriff walked through and made a full search of his wardrobe. That last one was actually courtesy of Collinsport’s parallel constable, Jonas Carter, who besides mustard on ham had other preoccupations to consider apart from missing brake valves: “I had a lot of time to make a pretty thorough search, Burke. You know, you’ve got some nice clothes up there. Where’d you buy ‘em?” 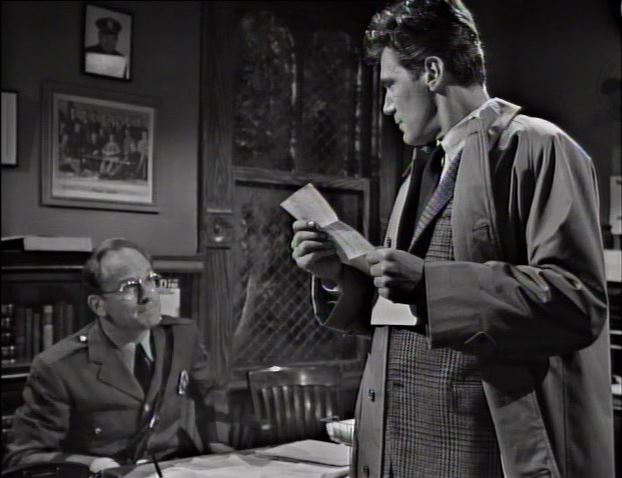 Bill Malloy’s untimely sudden, and for some folks convenient, demise has lately provided Burke with ample justification for making unwelcome cameos in other people’s domains in search of clues; whether inviting himself up to Collinwood, barging into Roger’s office armed with allegations intended to extract an admission of guilt or at the very least some telltale hint of perfidy, or simply storming into the sheriff’s office demanding an explanation, Burke has all the questions that no one wants to answer.

Today it’s to be the Evans cottage that’s added to Burke’s roving itinerary, crashing a dinner party in grand fashion like a grizzly bear wandering into a picnic area and helping itself to any discarded or neglected edibles while the hapless campers keep huddled in their camper vans nearby.

Burke of course had prior knowledge of the dinner party, having chatted with Vicki earlier while fueling his afternoon coffee binge at the Collinsport Inn restaurant. Hot under the collar over Bill Malloy and fresh from a heated exchange with the sheriff, Burke wants to talk manslaughter with Sam Evans. At the back of your mind, though, you have to be wondering whether Burke may be going to such a bother on this evening because he knows Victoria Winters will be there. After all, any host would be on his best behavior with a dinner guest in their midst, regardless of whether someone showed up at the front door uninvited. Burke might not get an honest answer out of Sam, but at least under the guise of civility he could be sure of an opportunity to pose a certain pointed question or ten.

Then again, there is still that underlying question about Burke and Vicki. Art Wallace, being a middle-aged male writer, couldn’t resist adding to the series outline Shadows on the Wall an additional story fragment suggesting the possibility that the two might eventually be linked romantically:

“…The reappearance of Burke relights a flame that once burned between them…and Vicki is trapped in its center” (Shadows on the Wall, p. 89).

Art Wallace envisioned the two enmeshed in a “violent triangle” with none other than Frank Garner, junior partner in the family law firm which looks after the legal and financial interests of the Collinses and who we shall be meeting further along in 1966, by which time the mystery of Victoria Winters will appear to hold an irrefutable link with Collinwood’s past.

END_OF_DOCUMENT_TOKEN_TO_BE_REPLACED

Still, you have to root for the underdog, and in terms of Burke Devlin that means Collinsport Inn vs. Collinwood mansion, Burke’s hotel room vs. the Collins family drawing room.

Episode 24 belongs to Burke Devlin, and is set exclusively on his “home” turf.

END_OF_DOCUMENT_TOKEN_TO_BE_REPLACED

In less than twenty-four hours, the return to Collinsport of a driven and vengeful man has had its intended provocative effect on those tied in with the Collins estate and business interests. Fishing fleet and cannery plant manager Bill Malloy is actively concerned, Collins family matriarch Elizabeth Stoddard is stoically unfazed, while restless and venturesome daughter Carolyn Stoddard is recklessly intrigued. It’s a combination that can only hold potentially life-altering consequences for all those involved.

END_OF_DOCUMENT_TOKEN_TO_BE_REPLACED

If there’s one aspect of Dark Shadows that comes across as comedy, it’s the notion of romance. Naturally, because this is Detergent Land Drama, one shouldn’t expect to begrudge the characters with any happiness in that area, at least not for the long term, but when it comes to even finding a suitable mate the folks at Collinwood, and anyone who chances to come into even remote contact with them, are positively doomed!

END_OF_DOCUMENT_TOKEN_TO_BE_REPLACED

For Dark Shadows fans who view the series beginning with episode 210, Sam Evans is likely perceived as a sympathetic character. At the very least, he seems innocuous, and for the most part you feel for him because his daughter Maggie, a character who is universally well liked, is soon to be kidnapped and you understand the tortured anguish of a loving father who only wants for his daughter to be returned home safely. Even Roger Collins at one point manages to almost express a measure of sympathy for Sam’s plight – almost, that is.

But taking the series from the beginning, it’s a different story – and not just because the first actor who plays him, Mark Allen, doesn’t seem to find as much favor with Dark Shadows fans the way his successor to the role does, David Ford. Perhaps it’s the company he keeps.

END_OF_DOCUMENT_TOKEN_TO_BE_REPLACED

From the beginning, Dark Shadows lives up to its name. Full of mysterious characters with secrets to be kept, the debut episode, and the three that follow, is set during the nighttime, when a sense of foreboding pervades the deepest, when the ghosts of yesterday seem the most threatening, piercing the looming shades of darkness like the light of an oncoming train.