“Clarice Blackburn was first utilized as a sobbing woman in episode #37, more than a month before her first appearance as Mrs. Johnson. The vengeful, conniving Mrs. Johnson, first seen in episode #67, is a far cry from the loyal family servant of later years. But she was intended to be even worse initially. The original idea was to make her a sinister, insane character who would menace Vicki” (Dark Shadows: The First Year, by Nina Johnson and O. Crock [summary writers], Blue Whale Books, 2006, p. 13).

END_OF_DOCUMENT_TOKEN_TO_BE_REPLACED 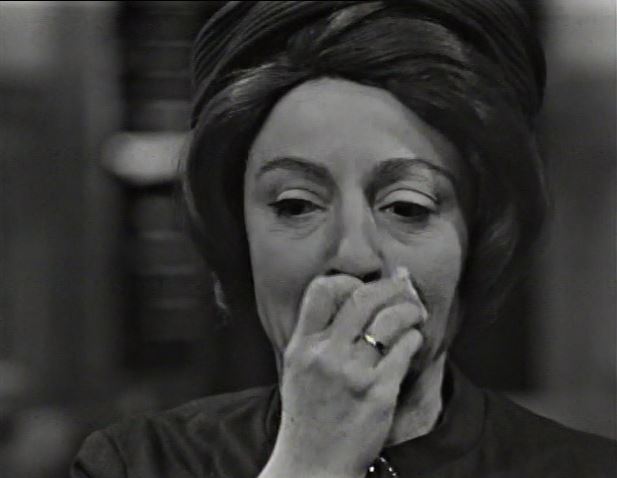 Bill Malloy it turns out represented different things to various folks around Collinsport. Despite his unrequited feelings for Mrs. Elizabeth Stoddard, Bill Malloy was nevertheless during her long hermitage in Collinwood a trusted friend and business associate let alone her one regular weekly contact with the outside world, not counting the woman she hired from town to clean once a week; after which the woman’s young son, Joe Haskell, would drive up the hill to pick her up while finding a few minutes here and there to chat with the employer’s daughter Carolyn. Her father having walked out six months before she was born, Bill Malloy had become to Carolyn through the reliable presence of his weekly business meetings something of a surrogate father, even dubbing her “Princess” out of affection. Today we learn that Bill Malloy was also a surrogate husband of a sort – to his housekeeper.

Thus far we have only heard of a “Mrs. Johnson” who Sheriff Patterson says told him about a phone call Mr. Malloy received the night he was killed, first mentioned with Dana Elcar’s introduction in episode 54. With today’s episode we get to know the housekeeper’s first name through the Dark Shadows screen debut of Clarice Blackburn, here making her second Dark Shadows “appearance”; yes, it’s true – the screen debut of Clarice Blackburn on Dark Shadows was in fact her second episode working on the show. You’ve heard of parallel time; this is a case of parallel casting.